I’ll start off by admitting that I am a rare Warlock player, have attempted a few Zoo decks but never had much such success. I would love a handlock deck one day, but it’s a lot of dust to get Jaraxxus and Mal’ganis. The Grand Tournament seems to want more of an interaction with the ‘discard’ ability with Fist of Jaraxxus being a card that you look to discard for the extra damage for zero mana cost. It seems a bit too random and situational to base a deck on.

As usual, there are some cheaply priced spells and minions but all with a reverse effect that may discard cards (Dark Bargain), destroy minions (Void Crusher) or deal damage to yourself (Wrathguard). All can be the making or breaking of a game potentially ruining a play or discarding a legendary. Both risks that I am always reluctant to take!

One new addition to the card set that I particularly like is the Dreadsteed, a 1/1 minion that will always resummon upon dying except if silenced. I love the way it will work with Power Overwhelming and other spells or minions that will buff the attack for one turn, as even if it dies it will be back for the next turn. A very sticky and annoying card that will have a large board presence and should help clear away a load of enemy minions.

Here are Emma and James’ picks out of The Grand Tournament’s new Warlock cards: 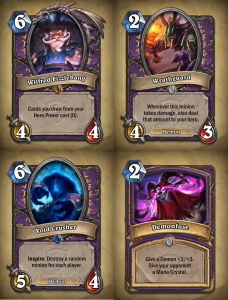 Emma’s Best Warlock Card: Wilfred Fizzlebang – it could be highly valuable especially with the Justicar Trueheart buff or using the hero power more than once in a turn. It will go very nicely into my Zoo deck!

Emma’s Worst Warlock Card: Void Crusher – too much risk involved, may get the wrong enemy minion and could remove your best one at the same time. The stats aren’t good enough to risk it.

James’s Best Warlock Card: Wrathguard – very similar to a Flame Imp, your hero will only really take 3 damage from it early on and a 4/3 demon has very high value.

James’s Worst Warlock Card: Demonfuse – utter s**t (apparently!). The downside of the Mana Crystal for the opponent is not matched at all by the buff it provides. There isn’t the choice of damage as with Demonfire either.

Next up, I will be uploading the Rogue cards, so keep up to date for that upcoming post. Please like and comment, it would be great to discuss some of these cards and hear other people’s best/worst cards from each class!