“In October of 1944, three student filmmakers disappeared in the woods near Burkittsville, while shooting a documentary, A year later, their footage was found” 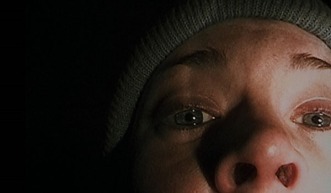 When I first sat down to watch The Blair Witch Project I was expecting a main meal of horror with all the trimmings of gore and jump-scares. I was very, very, wrong. Filmed through the lense of now missing girl, Heather Donahue, The Blair Witch Project is more unnerving that scary. It doesn’t reduce itself to the standard jumpy moments and terrifying monsters. Some may argue that nothing happened, and they may be right, but that’s not a reason to dislike the film. It’s content was interesting and clever, and although it wasn’t the film that it was hyped up to be I still really enjoyed it.

The most unnerving factor for me was the reality of the film. It by no means felt like a cinematic experience, I felt like I was watching the found footage of the lost teenagers, I had to remind myself that it isn’t real! There was no big monsters or knife -wielding madmen simply because the film wanted to be situated in the real world. When I watch horrors (which is a rare event) there’s always the slight reassurance that is isn’t real. The creepy doll or the bloodthirsty murderer is a character, acted well or created through CGI, there’s a certain distance I can place between myself and the film. The Blair Witch Project feels like a true event, there’s not tricks of camera or special effects. The basement budget of $35,000 could be the main driving force for this, but it was played out so well it didn’t need anymore put into it. The raw production suited the production perfectly.

I think what I’m saying is, don’t watch The Blair Witch Project expecting a full blown horror, it doesn’t really fit into that genre at all. A more suspense based film than anything else. It spooked me a little to find the notorious website of the film, written as if documenting the real events of these teenagers, Heather, Josh and Mike. The detail and realism of the website is so clever, it must have gone down so well at the time of release. Nowadays, do we really look at a film’s website? The trailer will normally do, but back in 1999 this must have made it all the more real. It looks like a cult page, the fact that is is so outdated works all the more in it’s favour.

I’m watching this film as part of my Witchcraft module, the obvious reference to witches in the title of the film. After reading more criticism, I have gained more information on the meanings of the film. Some argue the feminist viewpoint that the film project was doomed to be disastrous due to the female leadership and some the idea of the domestic no longer becoming a comfort at the end of the story. All interesting ideas that make me like the film even more.

Really not what I expected but a very good film, with the perfect ending: