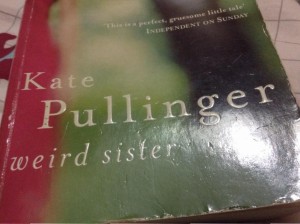 My latest Witchcraft book was certainly an odd one. Kate Pullinger’s Weird Sister felt as though it should have been a compelling read, the tension based plot was there with intriguing premise and characters yet something was missing. The story sees American woman Agnes Samuels move into the English rural town of Warboys. She instantly enchants the community winning the affection and admiration of most of the inhabitants. She meets Robert Throckmorton, the resident bachelor and they hit it off despite the dismay of Robert’s childhood sweetheart Elizabeth, who has also recently returned to the small village of Warboys. Agnes’ arrival sparks the beginning of many devastating events that wreak havoc amongst the Throckmorton family and the entire village.

I think the main problem with the book is that too much is given away too early on. We learn very early on that Agnes is a witch who, according to historical information, was sentenced to death by the Throckmorton family hundreds of years ago. The clear revenge motive is laid clear pretty early, so we know what is going on but we are simply waiting to see how Agnes decides to ruin the modern Throckmortons’ lives. The book really tried to add an edge of mysticism throughout with hints of the witchcraft element leaking in, although we knew already! I wasn’t a fan of Updike’s approach in The Witches of Eastwick where the fact they were witches was hardly mentioned, but I appreciate that more now I have read the other end of the spectrum. I knew what and who Agnes Samuel was extremely early on, so subtle writing wasn’t an option, which was a shame as there was some really well written passages.

I would say the shock factor was done very well by Pullinger, I really did not expect some of the graphic scenes or deaths that occurred. The revenge is done very well in this case, so could easily fit into the other module I am currently reading for! One of the main aims I got from this book was the way that the modern day witch narrative ran parallel to what we expect from a narrative about the original witch hunts. In the village of Warboys, the mere presence of Agnes is enough focus of blame for the mishaps and wrongdoings that befall them. In a similar way to how accused witches would be to blame for anything from miscarriages to the milk being out-of-date. As Agnes says herself, the dismantlement of the Throckmortons was probably going to happen anyway her presence just allows onlookers a means of pointing the blame. So a slight message to take from this novel, perhaps.

Overall, quite a good read, I wouldn’t urge you to go out of your way to read it but don’t pass up on the chance if it happens to present it. Pullinger’s style is very well paced and description is never to convoluted or overextended. Chapters move in short punchy snippets which provides multiple points of view as well as moving the plot very quickly. Quite an interesting story with a message I can take into my further readings on Witchcraft.

One response to “Weird Sister by Kate Pullinger – Book Review”