It was just too easy to get confused by the literal madness that was Santa Clarita Diet. It was perhaps one the most bizarre watches I’ve had for awhile; it was grim, gory but was also trying to be weirdly funny. I love a good dark comedy, but dark comedies need meaning behind them. I felt this Netflix series, although being incredibly open about how barbaric its tale was, never quite got anywhere with its storytelling. All the potential for dark comedy genius seemed to be there, but never quite took off.

Despite some mildly entertaining, Santa Clarita Diet did feel a little flat.Drew Barrymore and Tim Olyphant star as Sheila and Joel Hammond, in what is, essentially, a tale about a suburban family finding a new lease of life after Mom becomes an undead cannibal.

A Strong Stomach Required For The Santa Clarita Diet 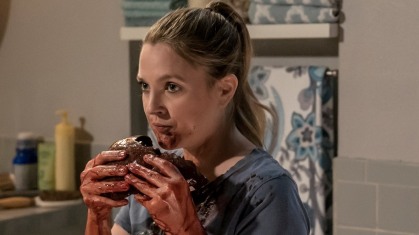 The premise of this series came at a huge surprise for me. I’d seen promotions for the series with Drew Barrymore flaunting a bloodied up ice cooler, although I foolishly assumed a tale about murder rather than a dabbling with the undead. Santa Clarita Diet is very gory at times and doesn’t hold back with blood spatters and all-out gore. I’ve read a few complaining articles on the blood and guts, but I don’t think it’s much to shout about.

I think they attempted to use the gore as an extreme in the whole ‘escaping suburban life’ theme. Sheila and Joel seem stuck in a rut, and Sheila’s transformation into a zombie (of sorts) somehow releases them from the constraints of being a normal American couple. Whilst their friends and neighbours are escaping their lives through sleeping around and going out dancing, Sheila’s tucking into the innards of co-workers and neighbours. I guess there’s an attempt at some sort of comparison here? Whatever they’re trying to say never becomes clear, I think the show all too often gets too lost in shock factor than storytelling.

A Series Worth Binging?

I think I’d be lying if I said this is a ‘must-watch series’, admittedly it is vaguely entertaining – I did make it to the end of the season after all! The lack of seriousness involved it what kind of gets you to the end. This paired with the general sense of bemusement and odd intrigue is what will carry you through most of Santa Clarita Diet. Barrymore and Olyphant weren’t too bad either, but I think you’ll watch the show feeling something is missing.

There’s no character investment or intriguing twists and turns, it just feels a bit mindless at times. However, maybe that’s what you’re looking for in a series. If easy and crazy is what you’re going for, you’ll certainly find it here! If you need something simple and non-though provoking, then Santa Clarita Diet will probably sit comfortably on your bingeing menu.

What did you think of Santa Clarita Diet? Is there some hidden meaning I’m missing, or are we simply meant to take the show at its face value? Let me know what you think in the comments below!