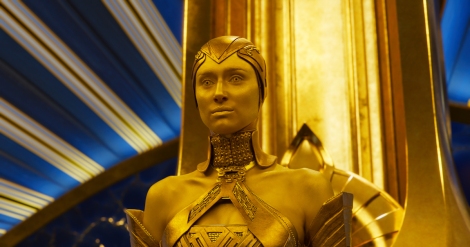 Everybody knows that true Marvel fans stay until the very end of the credits. From the latest Marvel film, we have a whopping five Guardians Of The Galaxy Vol. 2 post-credit scenes. These scenes are always a poignant reminder of a larger Marvel universe and always add a comedic edge or hint at where the MCU will take us next.

The first credit scene shows Kraglin (played by Sean Gunn) having a go with Yondu’s whistle-powered-weapon. It doesn’t seem the easiest thing in the world to control, which obviously shows again just how badass Yondu was! Drax bears the brunt of Kraglin’s first test drive in this pretty funny first credit scene. I guess Kraglin will have a more prominent role in future Guardians endeavours.

Stallone Will Be Back

A surprisingly random appearance from Sylvester Stallone looks not to be a one-off, as his team of Ravagers watch Yondu’s send-off with pride. Stallone plays a character named Stakar (a.k.a Starhawk) a cosmic superhero as well as one of the original founding members of the Guardians Of The Galaxy in the comics. His well-established team were all founding Guardians in the comic book (along with Yondu), so it certainly won’t be the last we see of these guys.

Also, with director James Gunn stating in an interview that he’s keen for Sly to do more, I reckon he could be a prominent figure during the upcoming Infinity Wars.

The third cutscene featured Ayesha, proving that the Sovereign aren’t done with the Guardians yet – which is kind of reassuring as they didn’t do much of note in the film itself. The scene reveals some sort of cocoon/chamber which she names ‘Adam’. Who is this new character? This video will perfectly explain all you need to know about Adam Warlock and his place in the Marvel Universe.

I reckon Adam Warlock will be a formidable addition to the Guardians universe, but most importantly, it looks as though we have a power that may be able to rival Thanos!

We all loved Baby Groot in Guardians Of The Galaxy Vol. 2 although it looks like he might not be around for long. They just grow up so fast, don’t they?! Groot is already a teenager, as looks to be having the usual mood swings and Starlord-parenting issues. Full grown Groot will more than likely be back for the next film, which will definitely be more beneficial if there are bigger fights to come.

Partway through the film, we see Stan Lee sat with a group known in the Marvel Universe as ‘The Watchers’. Ancient watchers of the Universe, this humorous little cut scene insinuates that Stan Lee is a watcher himself! He states that ‘once he was a FedEx guy’ amongst others, perhaps hinting that he is the SAME PERSON in all of the Marvel films. It doesn’t add much to anything, it’s simply a fun nod to Stan Lee’s long inclusion in the Marvel films.

For a larger rundown of Easter Eggs and Marvel references from the rest of the film, there’s no one better than Mr Sunday Movies!

That’s my rundown of the Guardians Of The Galaxy Vol. 2 credit scenes! Five is a pretty big number of credit scenes, but it didn’t feel too excessive in my mind – probably since most of them were pretty lighthearted.

What did you think of the ending scenes? Is there something I’ve missed? Let me know in the comments below!